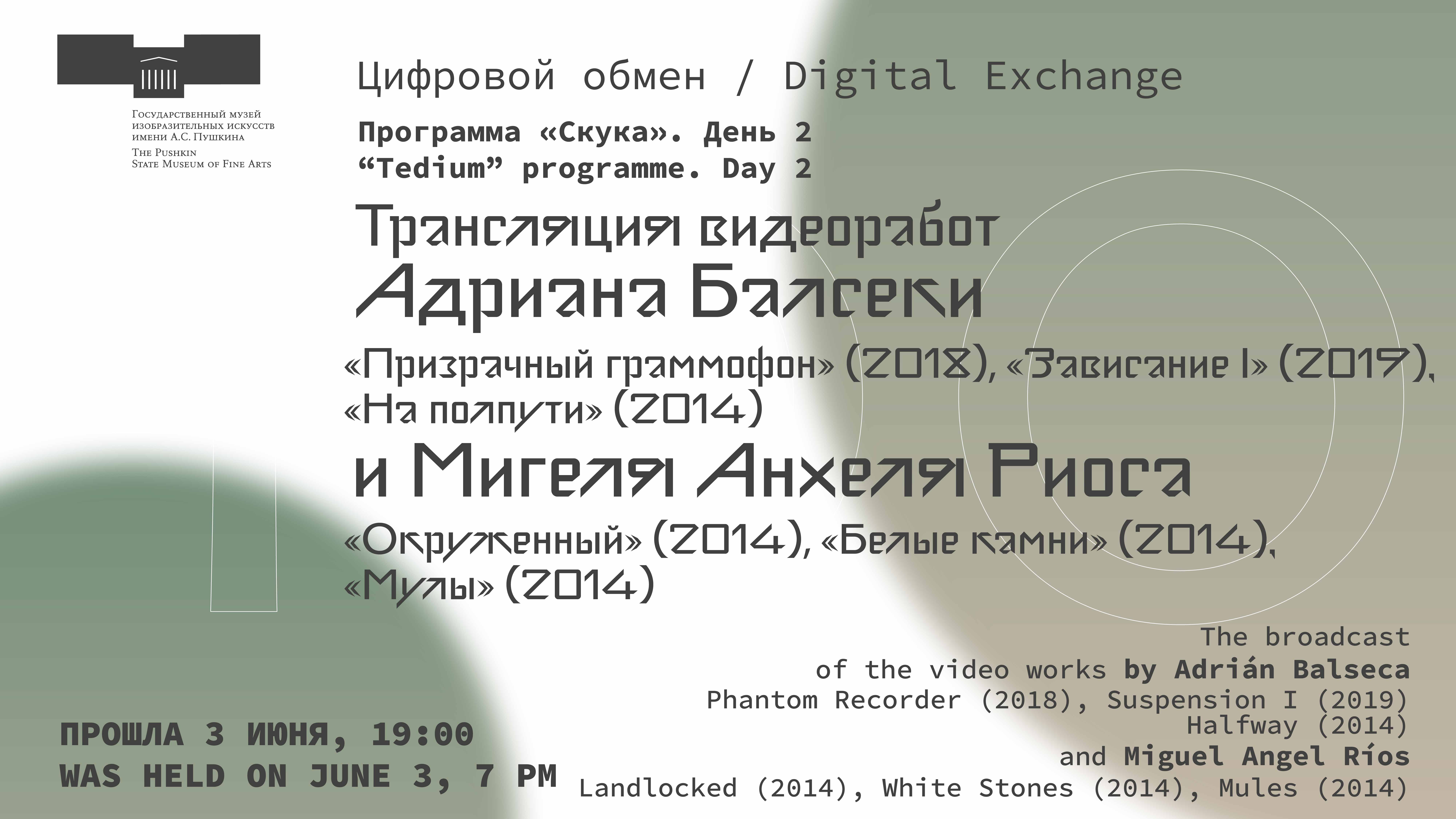 Young and promising artist Adrián Balseca (Ecuador, 1989) is the main hero of the second day of “Tedium” programme together with one of the key Argentinian artists Miguel Angel Ríos (Argentina, 1943). Both of them focus their artistic research on exploring political and economic hierarchies of the world, with Adrián Balseca having more focus on the environmental aspect, Miguel Angel Ríos taking a sociological approach.

It is “Fitzcarraldo” (1982) — a movie of a German filmmaker Werner Herzog, — that becomes for Adrián Balseca a starting point for the materiality of the world in the age of the Anthropocene in his “Phantom Recorder” (2018). Herzog’s movie tells the story of an entrepreneur who wants to build an opera house in the heart of Amazonia. With his work, Balseca subverts “colonial regime” of a scene of the movie, where we see of a gramophone wandering around on a boat. Now, it is not the jungles that are silenced by opera arias; on the contrary, the gramophone transmits the sounds of the virgin forests. Still, whatever the record is playing, the recorder bears visually dislocated aesthetic to its surroundings.

Not so long piece “Suspension I” (2019) is a paraphrase of the myth of the land of milk and honey, where the humans are focused on consumption, not on production. In the world of the artwork, a balsa tree endemic of the subtropical jungles of South America bears not the juicy fruits, but containers filled with fossil fuels. The artist underlines the illusiveness of human emancipation from an infinite circle of accumulation and values of the late capitalism and suggests turning to alternative world orders.

The subject of the oil boom and alternative economies is continued in the last artwork by Adrián Balseca of the programme. “Halfway” (2014) is constructed around the artist’s journey between Ecuadorian cities Quito and Cuenca, aboard a pick-up Andino Miura 77 — the last model produced during the military dictatorship of General Rodríguez Lara. Before the start of his 350 km journey Adrián Balseca removed the fuel tank from the vehicle, this way making himself to depend on the solidarity of the stranges along the way to finish it. Join the metaphysical journey of the artist to find out how his experiment turned out.