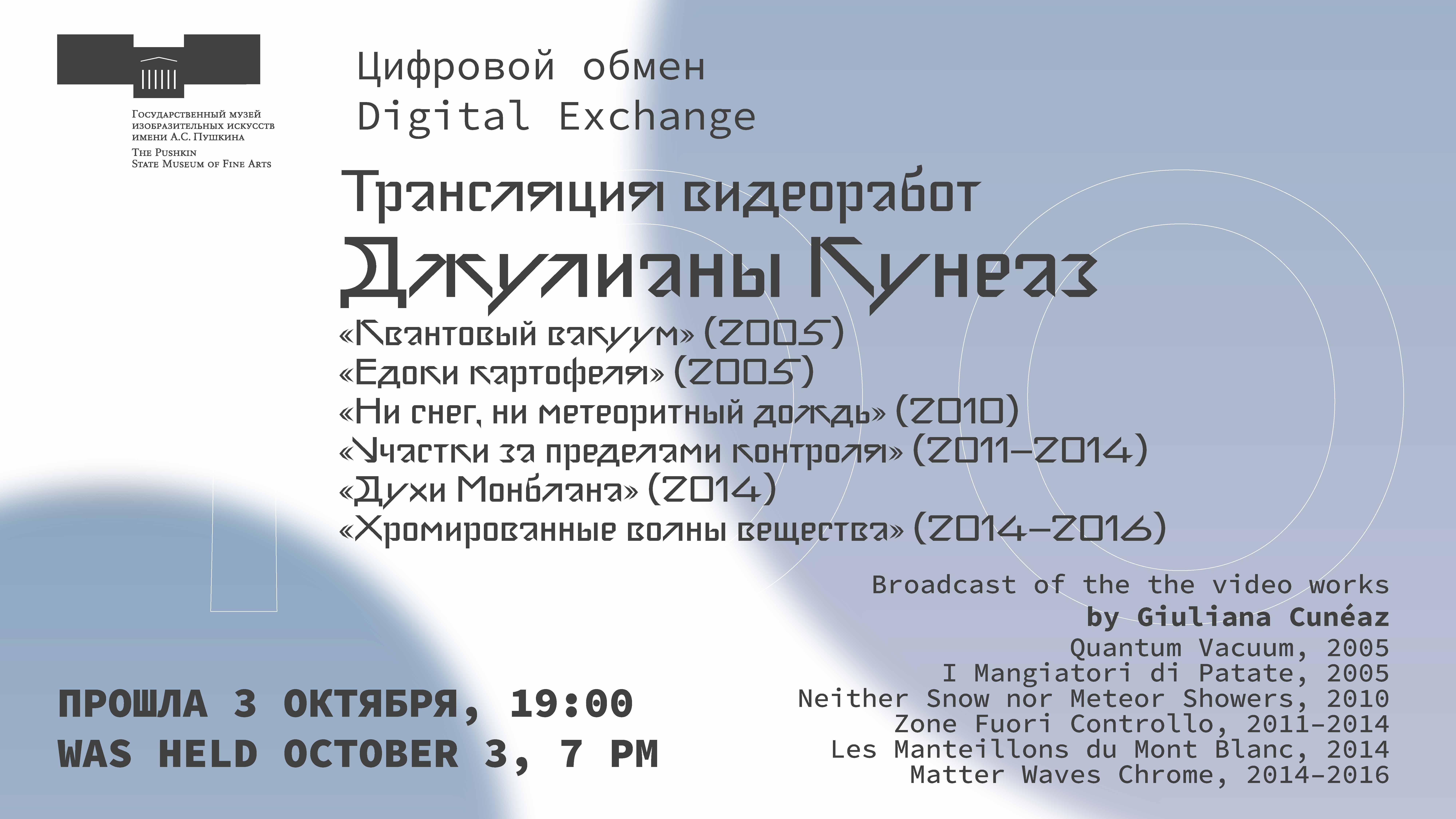 Since the early 1990s, Giuliana Cunéaz, an Italian media artist, has been exploring a wide variety of mediums, from video installations to sculpture. From the very beginning of her artistic practice, the study of the nanomolecular world and the creation of artificial environments have played an essential role in her artistic research. In the 2000s, the artist discovers an interest in 3D modelling: the technology allowing to transform the knowledge about the world obtained through scientific research into virtual landscapes that sometimes interact with real objects. Using 3D modelling, Giuliana Cunéaz explores mysterious and ambiguous forms born from primordial structures, and mutations and transformations become integral characteristics of her works.

The opening works of the programme – “Quantum Vacuum” (2005) and “I Mangiatori di Patate” (The Potato Eaters) (2005) – are Giuliana Cunéaz’s first experiments after she became interested in 3D technology. In these videos, viewers observe relationships between virtual environments and real actors: a nameless man who seems to be performing a “sacred dance” in “Quantum Vacuum”, and groups of people in “I Mangiatori di Patate”, who become duplicates of the heroes depicted by Vincent van Gogh on a painting of the same name. Both videos refer to ritual and religious practices: creating the main character of the video “Quantum Vacuum”, the artist was inspired by sculptural images of ancient deities and Giovanni da Modena’s fresco “Hell” (c. 1410), while “I Mangiatori di Patate” quote the cults of land and fertility.

The video “Neither Snow, nor Meteor Showers” (2010) is a game with the form. The objects depicted in the work are mysterious and ambivalent; they cannot be clearly defined and correlated with a particular item of the real world. Forms and objects are in a fluid state, continually replacing each other and being born from each other. For the artist, this is a way to tell us that every ounce of matter contains the forms and energies of the universe.

The same principle is implemented in the cycle of stereoscopic three-dimensional animation “Zone Fuori Controllo” (Zones out of Control) (2011–2014). The artist devoted this cycle to the issues of natural and ecological disasters. The viewer sets off on an unpredictable journey through virtual landscapes – a stormy sea, a mysterious grotto, an erupting volcano, an icy ocean, each one born from nanomolecular images Cunéaz saw with the help of extremely powerful electronic microscopes: the macrocosm she created repeats the images of the microcosm. Another reference for the artist was Romantic painting, in particular, works of Caspar David Friedrich and William Turner.

In the second to last work of the program – “Les Manteillons du Mont Blanc” (The Manteillons of Mont Blanc) (2014) – Cunéaz again turns to sacred stories: here she explores the legends of the Aosta Valley, telling of certain creatures in fiery cloaks that live deep inside of Mont Blanc. The artist brings these spirits to the surface and gives them a physical embodiment in the form of scarlet crystals, thereby creating a dialogue between the visible and the invisible.

In the final video of the screening “Matter Waves Chrome” (2014–2016), Cunéaz reiterates her interest in constant change and transformation. The viewer observes the waves simulated on a computer carry various mysterious objects ashore – like a pirate treasure. The artist uses real-life objects but changes them so that their meaning ceases to be obvious, and she enriches them with a new sense. However, as soon as one manages taking a closer look at these mysterious objects, a wave washes them away and brings new ones – this is how a precarious balance between creation and destruction is born in the space of the work.