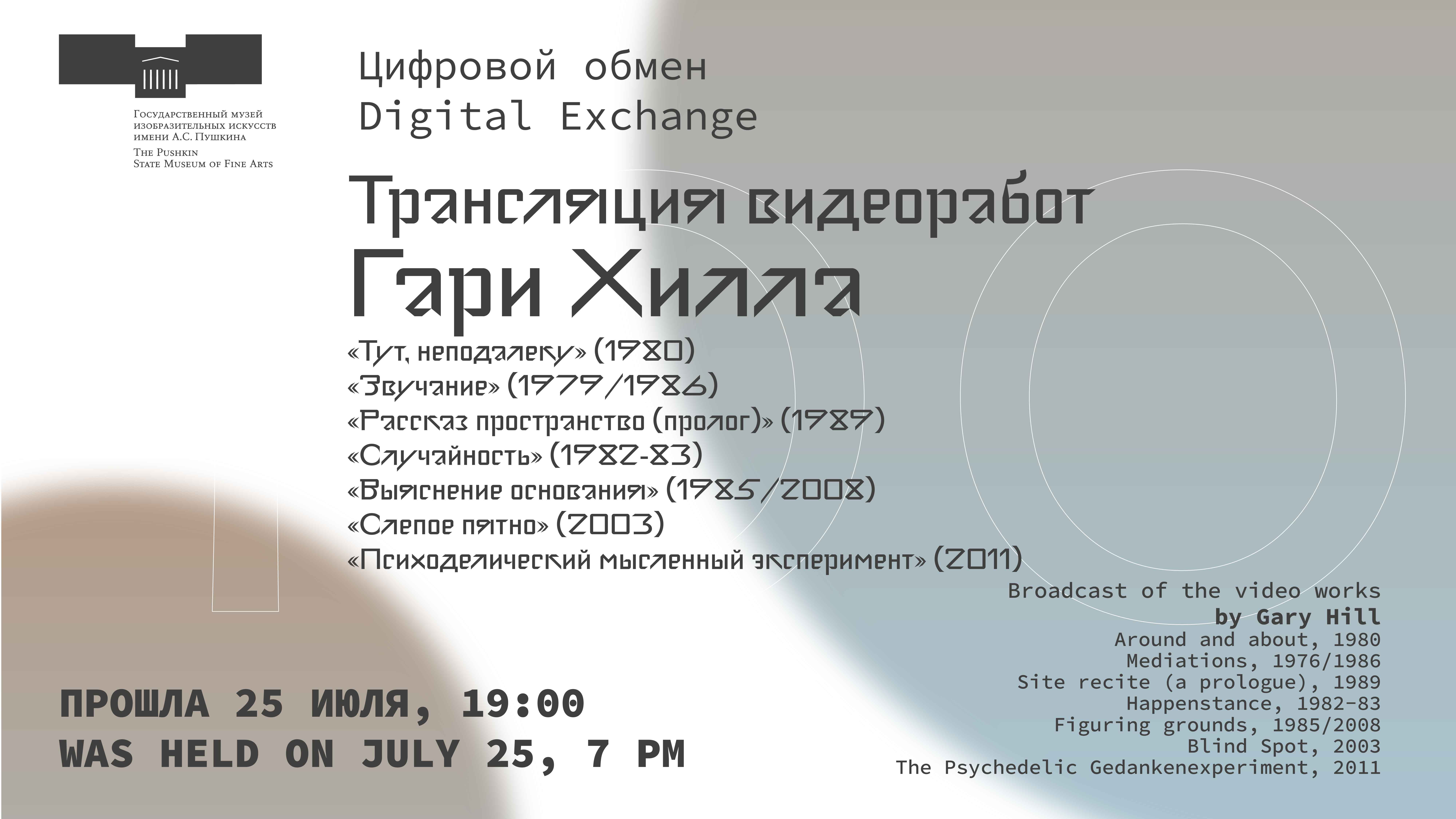 The video program of the classic of American media art includes works created in different periods, starting in the 1980s up to the artist's recent experiments. The first work presented – “Around and About” (1980) – Hill describes as follows: “Around & About came out of a ‘what if’ scenario. What if I were to cut images to every syllable of a spoken text? I limited myself to images of the room, mostly unmemorable moments of walls, furniture, and whatever else was lying around. It didn’t really matter; it was more about change and keeping the viewer occupied while I spoke. The speech was ‘automating’ the event, making whatever happened happen, at times drawing the view off the screen to the hypothetical space outside the box.”

About the work “Meditations” (1979/1986): “A hand filled with sand enters the picture and slowly releases it into the loudspeaker’s cone. Every nuance of speech vibrates the speaker’s cone (or membrane), bouncing the grains of sand into the air. The more I speak about what is happening, the more it changes—or feeds back into—the movement and patterns of the sand. When the speaker is completely buried, the voice sounds distant but remarkably clear.”

About the next piece of the program – “Site Recite (A Prologue)” (1989) – the artist tells: “The camera discloses the transient beauty of the items one after the other, capturing the beauty of each for a fraction of a second before focusing on the next object. This precise focusing/ unfocusing continues for the duration of the work, while a narrator explores his momentary state of consciousness and relationship with the world, verbalizing his own thoughts as transient objects in an ontologically focused vanitas of mind”.

Holger Broeker on “Happenstance (part one of many parts)” (1982-1983): “Hill is creating a kind of choreography of thought – gives rise to an area of tension between the images and the spoken or written texts.  At the textual level, he addresses the ephemerality of linguistic meanings inside the ‘nature’ of language.  Musical and sound elements underscore the character of the individual passages and the complex intertextuality of the work”.

In the work “Figuring Grounds” (2009), the focus is again on speech, more precisely, its phonetic fundamental principles. Facing one another, Quasha and Stein begin vocalizing from the very grain of language, and the improvisational search for voices passes through recognizable swarms of phonemes with a possible word or phrase briefly coming into focus now and then. Camera movements and continual focal play mirror the highly nuanced vocal expression, tightly coupled with body and facial movements. The voices build upon one another, rising and falling in volume and pitch, sometimes in unison, other times in “conversation,” in a seeming attempt to let the primary roots of language speak for themselves.

“Blind Spot” constructs a space of living portraiture by “focusing time” on an exchange between the artist (the camera) and a man on the street in the small Algerian neighborhood of Belsunce in Marseille, France.  As the camera zooms in slowly on its subject, the imagery is interrupted by longer and longer segments of black/silence, in essence slowing the scene down so that it almost reaches the photographic.

Following the optics of the 1970s–1980s, “The Psychedelic Gedankenexperiment” is a declaration claiming the psychoactive event of lysergic acid diethylamide (LSD) as a “found performance” and as “the art experience par excellence.” This is followed by a list of attributes of the work of art, suggesting a comparison with other art (experiences) and showing compelling reasons why the power of The Psychedelic Gedankenexperiment would not only be difficult to dismiss but forces a re-evaluation of the entire historical paradigm of what constitutes great art.