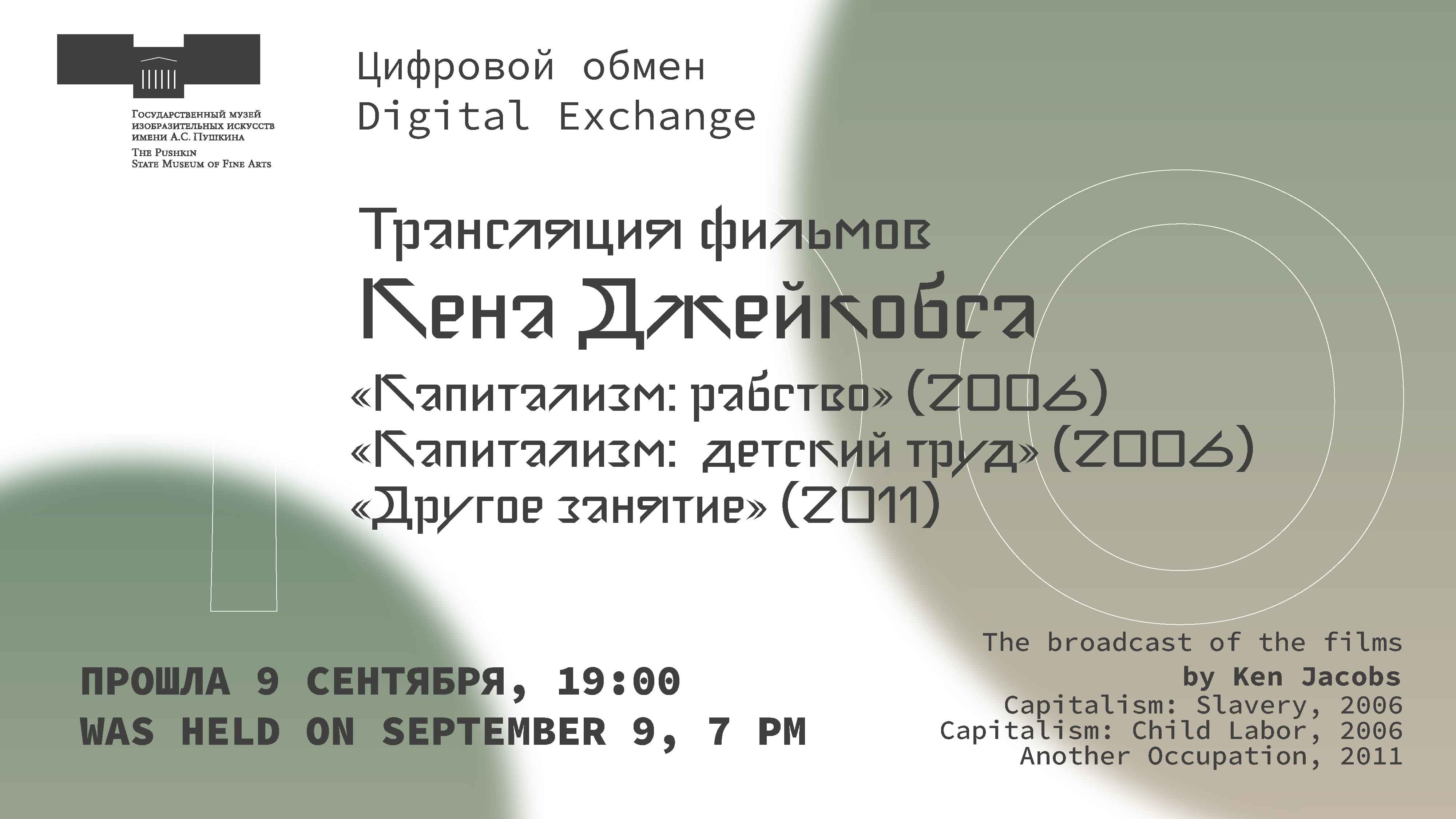 Starting from the 1950s, Ken Jacobs turns to the most advanced technologies of fixating the world. While he used Bell & Howell camera, also designed for journalists filming at the epicenter of military actions, for shooting his first, today he does not leave his house without a 3D-camera to create infinite moving images or “eternalisms”, as he calls those.

The piece included in second screening day – “Capitalism: Slavery” (2006), “Capitalism: Child Labor” (2006), “Another Occupation” (2011) based on the found footage – are examples of the artist’s experiments with visuality and its perception. Playing with the viewer’s ability to perceive moving images has always interested Ken Jacobs. A result of these experiments was the creation of so-called “Nervous System”, later transformed into a “Nervous Magic Lantern”: a specially assembled equipment consisting of two stop-motion beamers that projected the same image with a short delay, thus creating a stereoscopic effect, changing familiar ideas about time and space.

Films “Capitalism: Slavery” (2006) and “Capitalism: Child Labor” (2006) are based on stereo photographs of the Victorian era. One of them depicts slaves on a cotton plantation, watched by a white planter on a horse, and on the second we see a cotton mill machine room, with the production line being operated by children, also under supervision. Still here, there is a foreman who is in charge, but he is no different from a slave owner. In both of the works, the artist uses lots close-ups, as if trying to find a face of this capitalistic world, that is built on the perception of man as a tool or even raw material for creating a product. The artist seems to be creating augmented reality: a viewer enters the image and experiences a historical era captured in photographs, he is on the place of the heroes where, in reality, no one would want to be. Computer manipulation used by Jacobs creates the effect of volume and movement. Gloomy effect of flickering images is enhanced by the soundtrack of Rick Reed, who used mechanical clangs characteristical for factories and plants creating a score for “Capitalism: Child Labor”.

In the movie “Another Occupation” (2011) – that closes the second day of the screening programme – the artist expresses himself form the position of leftist critics extending and complementing it with the post-colonial and anti-war discourse. Applying his method of creating “eternalisms”, the artist immerses a viewer into a ghostly world based on a fragment from a propaganda film of the first half of the 20th century. The viewer becomes a passenger of “stroboscopic express” that passes by rivers, jungles and plantations, where for the workers are being watched by the soldiers. Still, as the artist says, “the soldier is the most debased slave, forced to dress the same, same haircuts, even buried in a line with blank white headstones”. Ken Jacobs shows us the true cost of war and an exploitative economy without displaying any overtly repulsive imagery. On the contrary, we do not see anything extraordinary here, and Rick Reed’s score only enhances an otherworldly effect of the piece.