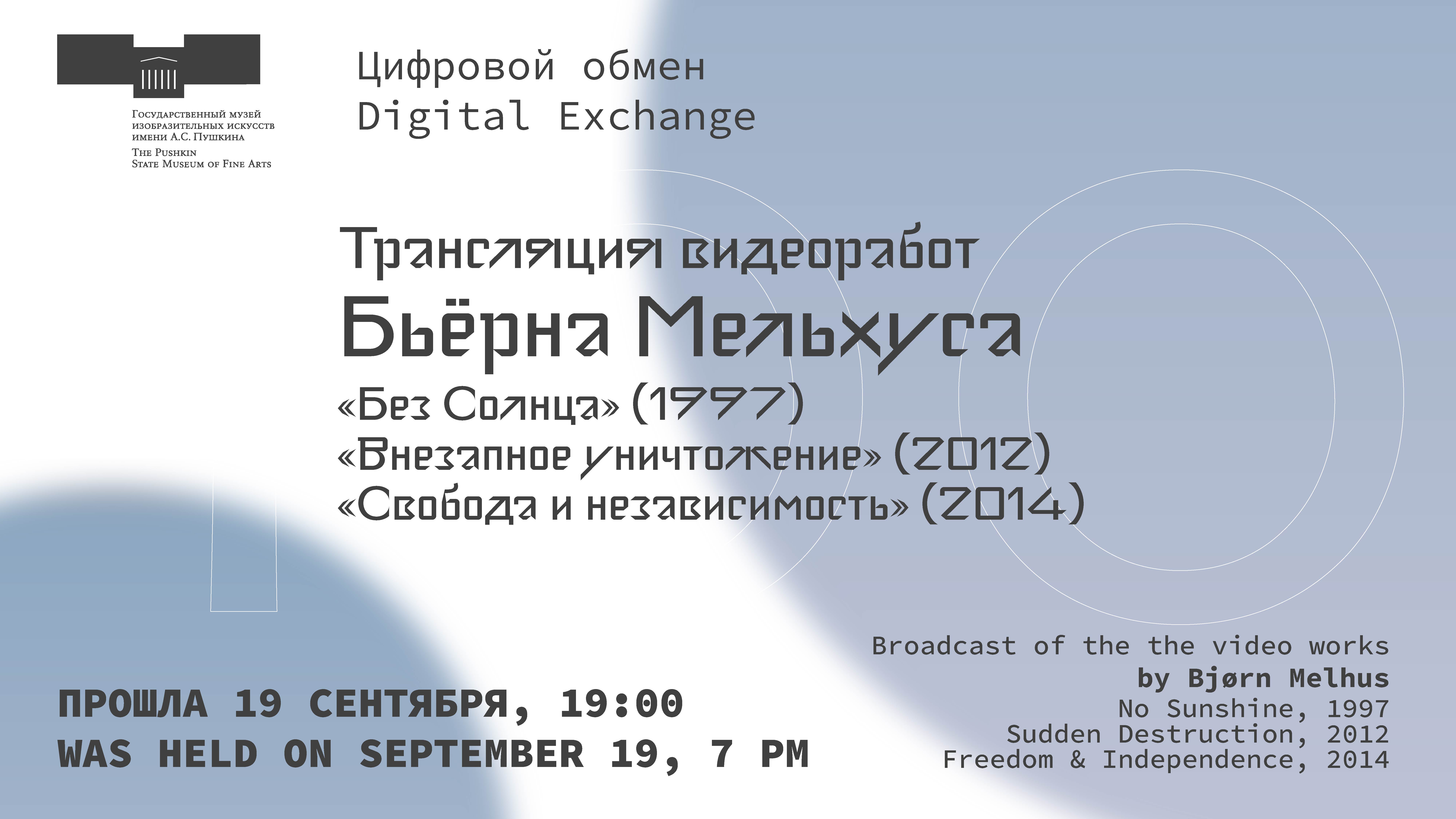 The globalized media society and culture are the main focus of the works created by Bjørn Melhus, one of the most distinguishable contemporary media artists. His artworks are always easily recognized, as it is the artist who plays all the roles in them, acting as a universal and independent form that can be filled with the characteristics of any character. Most often, the images found in Melhus’s works are ironic and hypertrophied, reminiscent of popular television programs or computer games. The analysis of language and speech structures also play an essential role in the artist's work and can be seen as a key to understanding the intention behind his experimental art. Obsessive repetitions, verbal play, sound and images are often based on the principles of television programs and advertising.

Video program of the works by Melhus opens with the earliest piece in the selection – “No Sunshine” (1997). The video is dedicated to the period of growing up and making choices that each of us faces when childhood ends, and adulthood begins. Pop culture often refers to this topic, as it is suggested in the work by the voices of the two main twin characters – Stevie Wonder and Michael Jackson. The protagonists, resembling asexual “playmobile” toys, on the one hand, address children's entertainment industry. On the other hand, they turn to childhood memories, the definition of one's identity and popular models of psychoanalysis that existed in society in the 1960s and 1970s. In the end, the idyllic romantic image of childhood dissolves into images of television memories.

The creation of the piece “Sudden Destruction” (2012) falls on the time of mass discussion of disseminated ideas of the world’s end, originated from the predictions presumably found in the calendar of the Maya civilization. Also, during the creation of this work, the artist started exploring YouTube as one of the possible sources used in his creative method. In this piece, Melhus takes us to a typical hotel room where we see a doctor sitting by the bedside of a deceased. Suddenly, the deceased comes to life and begins to speak. The phrases that the dead persistently utter are taken from YouTube of self-proclaimed prophets-evangelists. Thus, the hero becomes, in fact, a mediator between the viewer and those people whose messages are being heard. The video work itself appears as a kind of apocalypse trailer.

In the video “Freedom and Independence” (2014), filmed in the Berlin morgue and modern districts of Istanbul, Melhus explores the shift of the global ideological paradigm to new forms of religious capitalism. Here, he also confronts the ideas of Ayn Rand (a philosopher and novelist who emigrated from Soviet Russia to the United States in 1925) with the evangelical motives of the popular American cinema of the late 1990s about global catastrophes (“Armageddon” (1998), directed by Michael Bay, and “Deep Impact” (1998), directed by Mimi Leder). It was Rand who became a prototype for Rendy, the main character of the video. Randy creates two digital clouds and sends them on a journey through the city, where they materialize in the images of Freedom and Independence. Creating a dystopia styled as a tragicomedy, Melhus turns to criticism of the philosophy of objectivism and the model of the world of global capitalism.