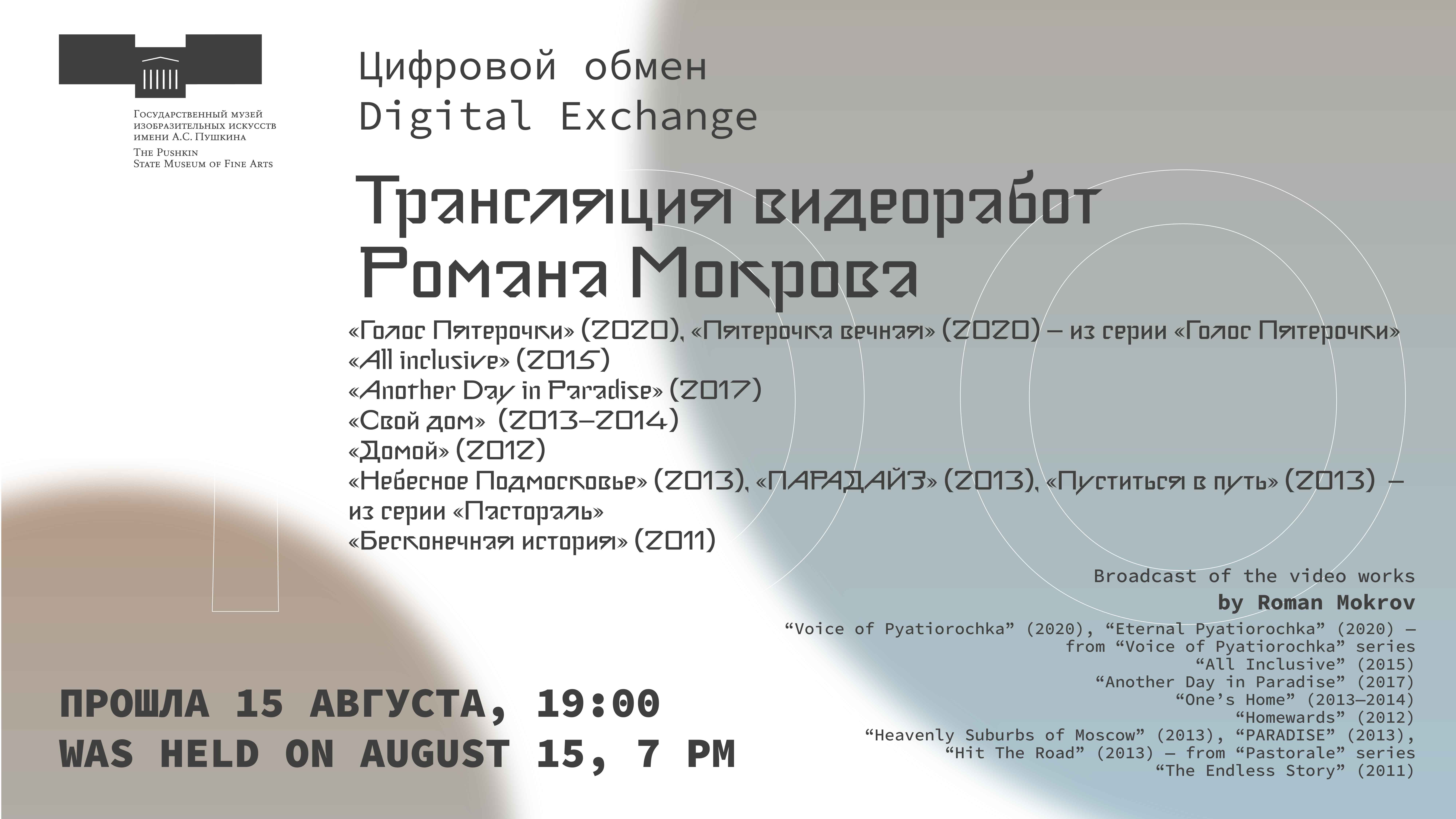 The video programme presents the works of a Russian artist Roman Mokrov, whose videos immerse the viewers into subjects and practices that are well-known for the Russian audience, especially for those who live in the suburbs. The artist calls this suburban social environment “NOTMOSCOW”, that becomes the main focus of his research. Noisy courtyard parties, going to the nearest grocery store, wandering around searching for a lake or river in a forest, where you can escape the heat or travel in time, are among the distinctive motives of Mokrov’s works. In this strange summer 2020, all these activities make us closer to each other.

The program includes 12 works created since 2011, as well as the ones the artist filmed from a window of his apartment during the period of self-isolation this spring (“Voice of Pyatiorochka” series).

The video programme features two pieces of the “Voice of Pyatiorochka” series (2013–2020): “Voice of Pyatiorochka” (2020) and “Eternal Pyatiorochka” (2020). Nowadays, when we are experiencing the consequences of COVID-19 spread, these works assume new meanings. “During the isolation, mundanity and loneliness replace all and any social constructs. Under these conditions, artistic and everyday visions mix creating a chimaera. Today, a familiar walk from a door to the nearest shop turns out to be a trip full of surprises, and bright lights of “Pyatiorochka” become more alluring than Las Vegas,” says the artist about these works. So, it was a way to the nearest supermarket (and watching it from the window of your apartment) that became one of the first possibilities to have fun outside this spring.

The works “All Inclusive” (2015) and “Another Day in Paradise” (2017) open the theme of the allure of a vacation by the sea. In “All Inclusive”, the artist shows ironically the stereotypes about “all inclusive” vacationers, for whom this type of holiday may be a real paradise. The theme of heaven continues in “Another Day in Paradise”. The protagonist gets in “the country of ‘eternal vacation’ where sweet, blissful everyday life turns out to be a prison. You no longer remember who you are, whether you are old or young, how long you've been here, and where your home is” (R. Mokrov). Trying to get out and return home, the character builds a raft and starts a journey that will last forever.

The programme presents two pieces of “One’s Home” series (2006–2020) made in 2013–2014. The artist shows typical post-Soviet regional bedroom areas. In the videos, we can hear music with folk and pop motives. In one video, the character watches the dawn romantically (and listens to a song “Home Grounds” by Yuri Antonov: “Let them tell me there are other places, There is different beauty in the world, I will still love my home grounds, My sweet home grounds!”). In the other video, we see dressed up girls dancing the quadrille (French dance that was popular in the Russian Empire until the 20th century) in a courtyard. This is how the artist turns to contemporary stereotyped thinking and the idea of Russian fun and folk culture.

Together with Sergey Mouraviev, Roman creates a video “Homewards” (2012) where two guys go on a river trip like their fathers did in their youth. Today the river is not as deep as it used to be and the guys have an air mattress instead of a boat. Here, the river, a classical ambivalent symbol of heaven and underworld, becomes the time machine helping the heroes to travel from the present into the past and also to transform into the “boys who invented an entertaining method to return back home” (R. Mokrov).

The following three works of the programme – “Heavenly Suburbs of Moscow” (2013), “PARADISE” (2013) and “Hit the Road” (2013) – are a part of “Pastorale” series (2012–2013). They continue the theme of travel and reflections on the Russian national identity. In these works, the heroes of post-Soviet mythology are simple people in search of entertainment and romantics in their souls, as well. All of them are organically integrated into a typical Russian provincial landscape. The heroes keep exploring the Moscow region, travelling on an air mattress, but not only along the river with its unhurried flow, but also fervently splashing in a flowering swamp. They say, it is easy to get bogged down in a swamp, and it is difficult to get out of it.

The video work “The Endless Story” (2011) features a continuous line of electric trains (the main transport connecting suburbs with the capital) and an endless, faceless stream of people сrowding from the provinces into the centre. People make their way around the system, literally through a hole in a fence not paying for their tickets at the turnstiles. This is how they make their way along a thorny path in achieving their goal. Most of them believe that there, in Moscow, their problems will finally be solved and that their dreams will come true. When someone stays for a long time in one place, they want to get out of it as soon as possible. So people use any chance of getting happiness and complete freedom.