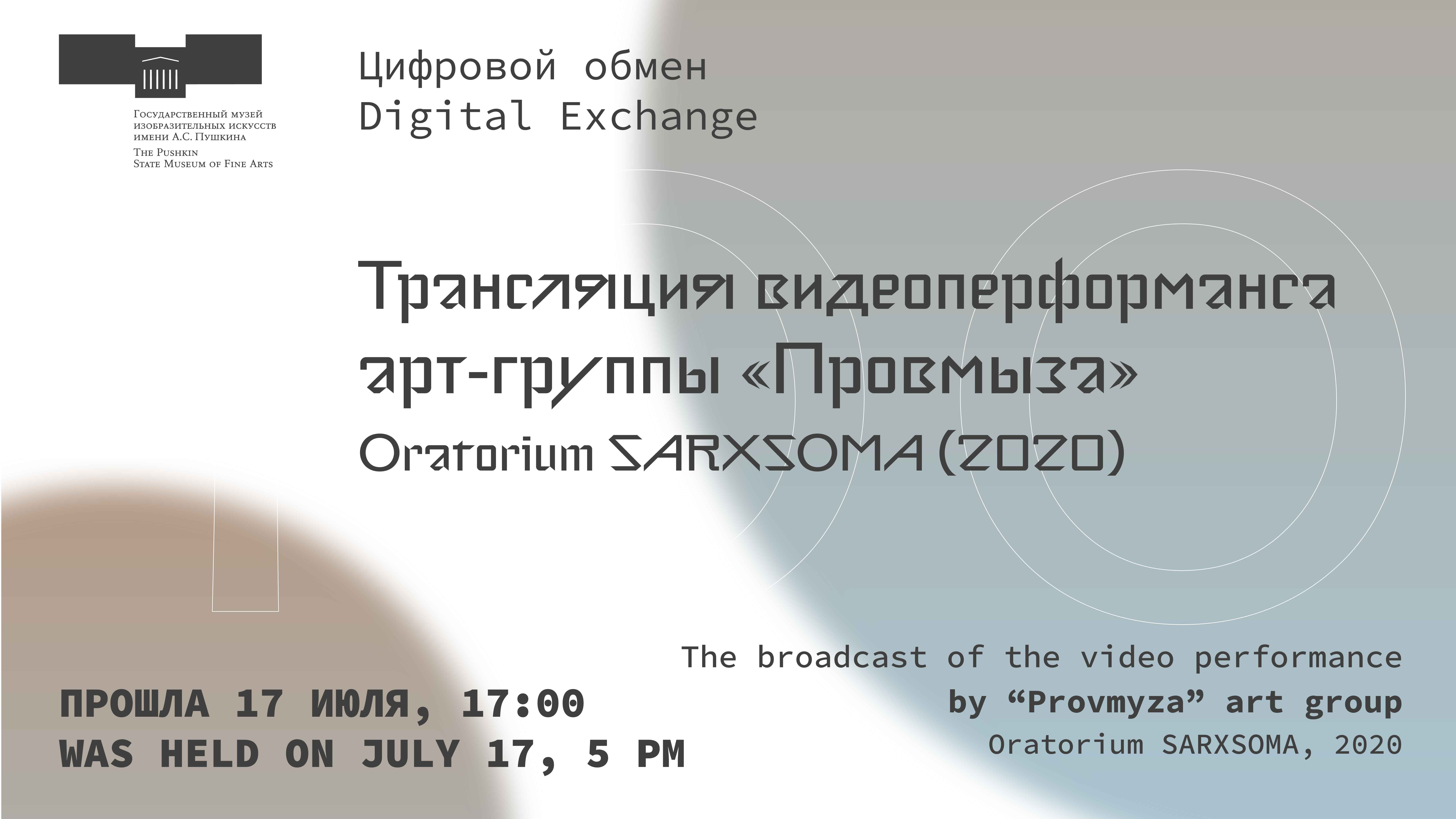 Main topics of the project Oratorium SARXSOMA are losses and damages, different modes of feeling and experiencing heavy life events. The video performance consists of four unequal parts, divided into 11 metaphorical subjects. Each part is built on a repetitive motif: the heroes move, balancing on the edge, losing balance, rolling down from a high mountain, and eventually going beyond that edge. Anyone who experienced loss is familiar with such a sense of being on the edge – just a second is enough to change everything irreparably. It is this second that interests the artists, who sink their heroes, both animate and inanimate, into a borderline condition.

Artists of Provmyza art group rethink the phenomenon of performativity in a unique way and look for the new opportunities to experience it. They go beyond the ordinary opposition of an active/passive look and internal perception. The visual part of the project is based on a dialogue with the art of the Middle Ages, Baroque and early modernism, with the visual techniques of those multiplied by contemporary technologies. Besides references to art history, the work includes all the key metaphors that the artists use in their art. Thus, the work created in the year of the 25 anniversary of the collective becomes a kind of retrospective video in its own.

For many years, multidisciplinarity has been the key characteristics of the works of Provmyza art group. In Oratorium SARXSOMA, artists combine different types and genres of art: theatre, performance, installation, video art and circus. Sound also has great importance in their art. The foundation of the sound of the project is Oratorio for two voices – soprano and bass, specially created by a composer Daria Zvezdina. The text is written in Latin, referring to a universal language of the Middle Ages, thus indicating the timeless nature of the events. At the same time, the musical piece differs radically from the classical examples of the oratorio genre. Alyona Verin-Galitskaya and Daniil Shaposhnik, the artists of La Gol Voice Theater, were invited to perform this contemporary musical piece.

A tired man with a child on his shoulders comes to the foot of a mountain hoping to find a lost animal. His strength is draining away. Exhausted by the long walk and pointless searches, wonderers go to sleep. An unexpected avalanche buries tired bodies of the strangers, mixing them with earth and mud. A short dream turns into eternity, and accidental death – into a frightening unknown.

Exactly four days later, the villagers notice a strange figure of a man holding a wounded child and a found animal on the top of the mountain. His actions are inexplicable: he comes to the edge of the mountain and slowly releases from the weak hands, first the animal, and then – the son. The villagers watch lifeless bodies slowly rolling to the foot of the mountain and disappearing into the earth, turning into dust. Soon, the emaciated man follows the bodies like a heavy stone flying into the abyss. A strange mirage brings a sense of anxiety and bitterness of loss; many villagers have tears in their eyes. Men cannot withstand bodily suffering and, turning away, go away. Fear of heights and the inability to fall asleep begin to haunt women and the elderly, children become unsociable and stop talking, animals burrow into holes – a frightening vision settles inside everyone and changes their life.

An instant after the fatal fall, a strange figure of a man reappears on the top of the mountain. Reviving from the dust of nothingness, it lights up with its appearance a meagre mountainous landscape. It repeats again and again, day after day, from hour to hour. From sunrise to sunset, people are forced to see the biased picture of a fall and rebirth of bodies. Frightened by an inexplicable cyclical phenomenon, people decide to perform a ritual burial of the deceased to part with the resurrected wanderers forever and find peace of mind. Following an ancient tradition, they sacrifice a haggard body of a horse and the hair of an innocent girl, ready in desperation to throw off her clothes and rush down after the ghostly entities.

Obeying the traditions, people use strange and ridiculous objects found in a cave to perform their rituals: an anti-tank mine, a banner glittering with gold, a safety parachute and precious jewellery. The elder tells the villagers the story of a deceased paratrooper who perished in the crevice of a slope about half a century ago. The elder is about to perform the ritual of getting rid of the annoying ghost by hanging upside down from the top of the mountain and reciting a spell.

To a big surprise of the villagers, they discover debris of wrecked cars on which the deceased wonderers arrived on the opposite side of the mountain.

To complete the ritual successfully, the villagers decide to sacrifice the most precious thing they have – an age-old tree growing on the top of the mountain. The bodies of their many ancestors and the bones of their pets are buried under the roots of this tree. The sacred tree has long been a place of worship and prayer for all the godly villagers. It absorbed the power of the mountain, the desperation of the wind and the fury of a mountain river. Having grown up on a dead spot and absorbing life-giving juices, it is preparing to become an innocent victim of human despair and fear overnight. The oak trunk, cracked over time, turns into an insurmountable barrier for cars continually climbing up and falling. They provoke dangerous rockfalls and destroy the surface of the meager slope. To get rid of the frightening mirage and find peace forever, people need to complete the ritual before the setting of the sun that burns away everything around. The sun is about to go out and turn into a shapeless piece of coal or stone.