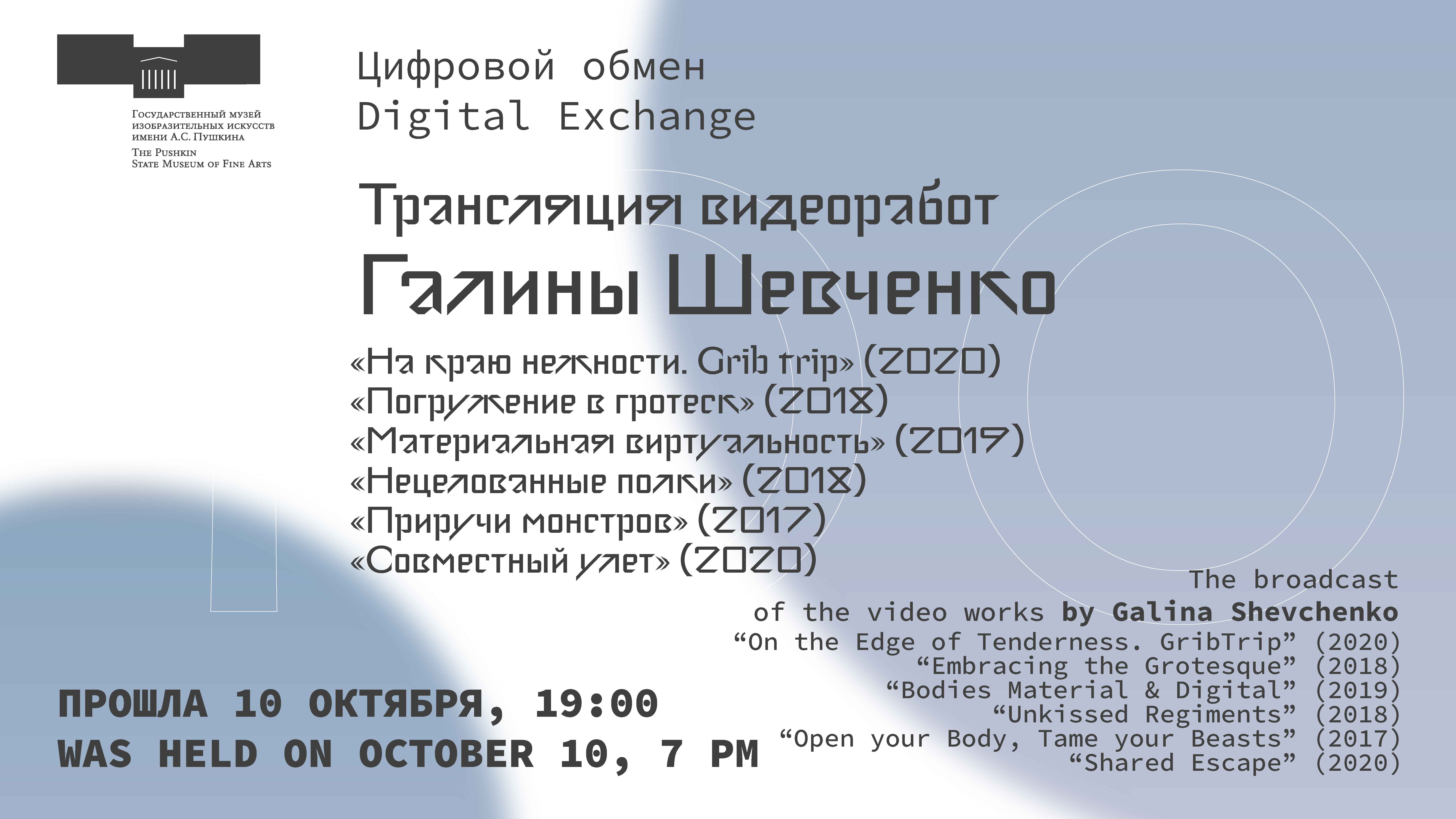 Galina Shevchenko is a contemporary multimedia artist, researcher and educator born in Moscow and working for a long time in Chicago. The ephemeral, elusive, illusory content of her video worlds refer the viewer to the artist's constant research. Her videos are full of translucent, woven, mostly female images. Galina addresses topics of post-feminist identity and corporeality and expresses them using animation, that includes objects both from the surrounding environment and created by the artist herself. Galina conducts her research and creative experiments in a bright and digitally unstable manner. Her main methods of work are constant multimedia processing, multi-exposure and mediation. As a result of her research, Galina discovers the topic of motherhood and demonstrates how it can be expressed through the means of new media.

The video program presents six works by Galina created from 2017 to 2020. Immersion in the artist's miraculous visual world begins with the premiere of the video “On the Edge of Tenderness. Grib trip” (2020). This work combines embroidery techniques as a reference to folk art and Slavic ideas about mushrooms as mythological objects. The piece was created in Chicago from April to August 2020 during mass protests and unrest in the United States, coinciding with a period of social isolation due to the COVID-19 pandemic. The trigger for the artist's research was Sergey Kuryokhin's statement "Lenin is a mushroom" (1991). Then Galina turned to study of two fundamental texts on the kingdom fungi: V.N. Toporov "On the semiotics of the mythological concept of mushrooms" (1985) and O. Belova "Erotic symbolism of mushrooms in the folk ideas of the Slavs" (1996). Galina worked on the visuality of the piece, creating animated dancing images. Meanwhile, three artists worked on the score: Edward Reardon, Dani Che and ValEra, who developed the original musical and vocal content. The musical part of complements the pictorial one in a natural way, responding to the rhythmic, electromagnetic and mythological manifestations of digital mushrooms, thereby enhancing the visual effects. Mushrooms, which for Galina "are both chthonic and sacred, meaty and delicate, forbidden and desirable, seductive and liberating, ambiguous and omnipresent, resilient and gentle beings" reflect her view of the mythological convergence of nature and culture.

The themes of identity, corporeality and grotesque are developed in the works “Embracing the Grotesque” (2018), “Bodies Material & Digital” (2019), “Unkissed Regiments” (2018), “Open your Body, Tame your Beasts” (2017). In the piece “Embracing the Grotesque”, as the title of the video unambiguously implies, a viewer is sent out in search of the depth of the aesthetic and conceptual aspects of the grotesque – an extremely fascinating but controversial cultural phenomenon and critical idiom. For Galina, this process of immersion in the grotesque is a winding road that takes us back to the origins of creativity and creation, a sacred place where visual culture and the depths of the subconscious meet. The mobility of the body, its perception and representation in the field of gender, identity and digital materiality become the main focus of research in the videos “Bodies Material & Digital” and “Unkissed Regiments”. In the work “Open your Body, Tame your Beasts”, a viewer is invited to examine the body of a monster and decide who it might be, whether s/he familiar with its features. The artist presents us a creature that is "distorted, powerful, vulnerable, loving and procreating, representing the world as utopian happy seductive and irresistible ecosystem populated with bodies within the existential crisis, constantly unfolding condition of seduction, desire, intimacy, disease".

“Shared Escape” (2020), the final work of the video program, was conceived and created during the artist’s self-isolation in the first months of the pandemic. This work reflects Galina's research on relations between the eschatological and the revolutionary, the sacred and the damned, as well as on the ways of representing those relations in combination with medieval symbolism and bestiaries in the context of the survival of the digital environment. The work premiered at the virtual conference "Occupying the In-Between", dedicated to the joint creation of a unified space for assistance and support through the use of non-traditional research methodologies and practices.