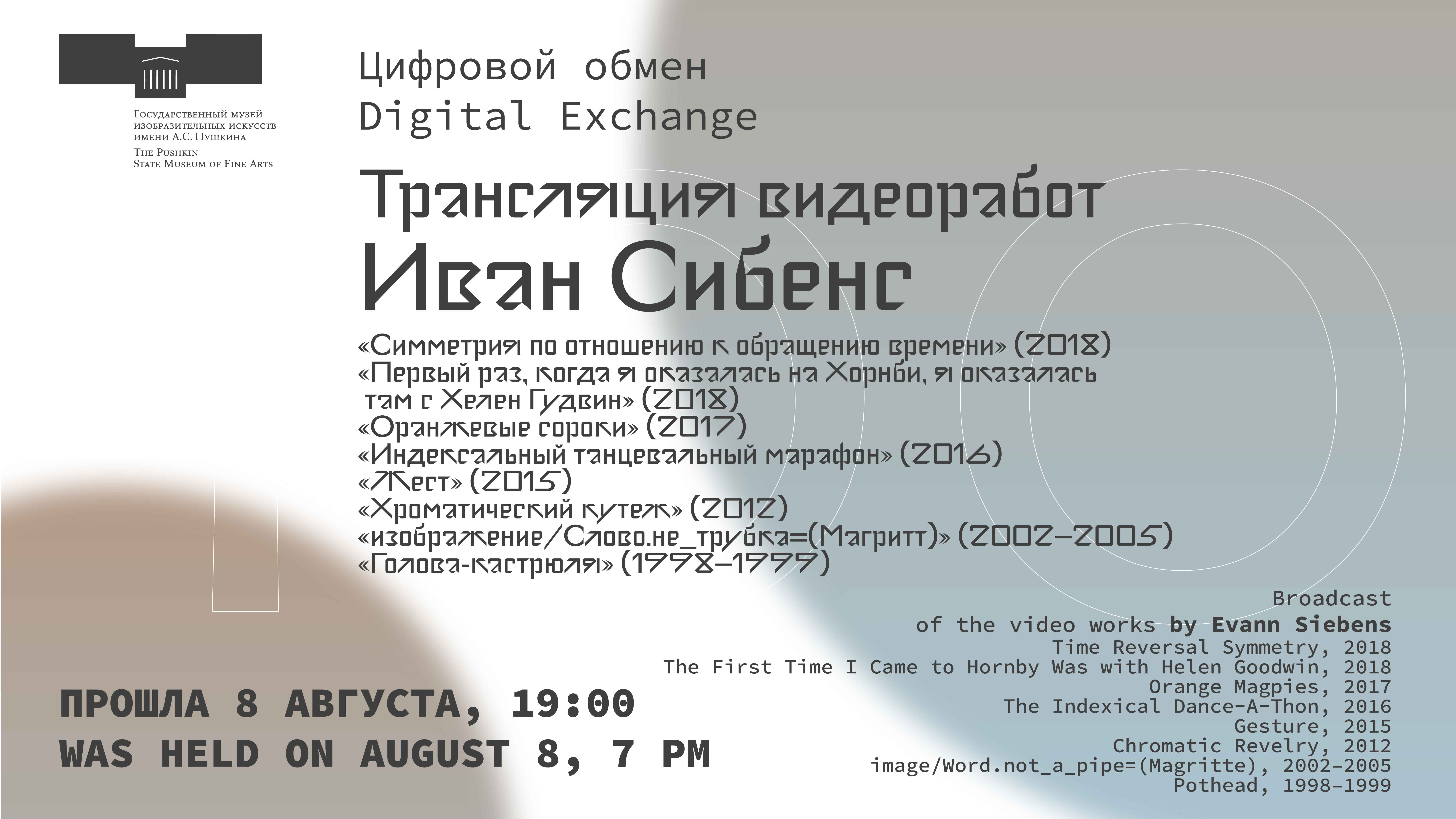 The video program of the Canadian artist Evann Siebens includes eight works created from 1998 to 2018. These works reveal the artist’s genuine interest in the plastic language of dance and movement, with its help she negotiates the human body as an archival site and the politics of the female gaze.

The first work of the program is “Time Reversal Symmetry” (2018). It was created as part of the LOoW project – a collaboration between artists and scientists at TRIUMF: Canada’s national laboratory for particle and nuclear physics. Here, Evann Siebens uses her body and movements to illustrate the physical phenomena of the atomic world, the main thing of her investigation is the relationships between matter and antimatter. Her movements doubled by the switch between 16mm colour and B&W film become an illustration of this “dance”. Another layer of meaning is hidden in the title of the work: reversing time, preventing ageing are some of the main problems of the humankind. As with many works by Evann Siebens, this piece references many artists working with the body and media, such as Yvonne Rainer, Trisha Brown and Bruce Nauman (particularly his performance “Manipulating the T-Bar” (1966).

The next piece, “The First Time I Came to Hornby Was with Helen Goodwin” (2018), is an homage to choreographer and dancer Helen Goodwin (1927–1985), who had a great influence on the development of improvisational dance, but her legacy is poorly preserved and is not known to the general public. Evann Siebens asks: why was Helen Goodwin’s legacy erased? Since she was a female artist? Or that her artistic field was performance, which is difficult to archive and conserve? Since she committed suicide or has not left an archive of her works? Siebens believes that the archive sits in the bodies of those who were there, and in this work, Anna Ngan, a dancer who performed in the Goodwin troupe, becomes not only a witness to history, but also a source of knowledge about it.

The video "Orange Magpies" (2017) is the artist’s political statement on the institutionalization of inequality and colonialism. The work was created as a mapping on the building of the Vancouver Art Gallery. Dressed in orange robes, dancers stand out as a bright spot against the background of an ordinary suburb, becoming outsiders; at the same time, their clothes evoke associations with prison jumpsuits, which becomes a reference to the title of the work: in many cultures, magpies are also associated with thievery (in addition, the building of the Vancouver Art Gallery used to house a court). The video was shot on sites that are unceded: they are still legally owned by local tribes and have never been transferred to the colonists. Despite the fact that the work is removed from its original architectural context, the opposition created by the artist is not lost, but on the contrary, intensifies: a typical example of classical architecture guessed in the silhouette of the building subconsciously evokes a sense of institutional superiority; thus, the work becomes more universal.

The following art piece “The Indexical Dance-A-Thon” (2016) introduces a sort of dance alphabet that Evann Siebens composes from fragments of recordings of both professional dancers and amateurs. Simple improvisational movements become elements of achieving the sublime through movement, and emotional ragged editing adds sincerity and spontaneity to it.

“Gesture” (2015) is another example of the artist's interest in building semiotic systems of gestures. This time, the new alphabet is based on the gestures that people now use to communicate with the digital world – we recognize swipes and double taps that our phones and tablets understand. But are these gestures enough to communicate with each other? The heroes, whose hands we see in the frame, represent several generations of people and demonstrate the generational conflict arising in the new paradigm of communication.

“Chromatic Revelry” (2012), the longest piece of the programme, is a series of ten short sketches that connects the ordered harmonic Baroque music of Johann Sebastian Bach with the chaos of rave culture. The ravers seen in the film were filmed in the 1990s, during the heyday of the rave culture. This opposition claims the transhistorical nature of the work itself, as well as the timeless quality of the culture of revelry and celebration.

In the protagonist of a three-part work “image/Word.not_a_pipe=(Magritte)” (2002–2005), the hero of René Magritte’s paintings is easily recognizable: he seems to have stepped off the canvas “The Son of Man” (1964). Siebens not only refers to one of the main characters of surrealism – the Everyman, – but uses surrealistic methods, as well: frame within frame, figurative and verbal puzzles, symbols: an apple, a pipe, an umbrella. The piece is framed with quotations from Michel Foucault’s work “This Is Not a Pipe” (1968), designed as a program code. With its help, Evann Siebens transforms the piece into a study of the nature of reality.

“Pothead” (1998–1999), chronologically the earliest work of the video programme, closes the screening and again manifests the primate of dance and movement over the word in the creative method of Evann Siebens. The artist defines her hero as “a modern truth seeker,” but in his search, he is ripping out pages out of a book – a classic symbol of knowledge, showing his contempt for the word and language; for him, the truth about the world and about himself is revealed in a dance.