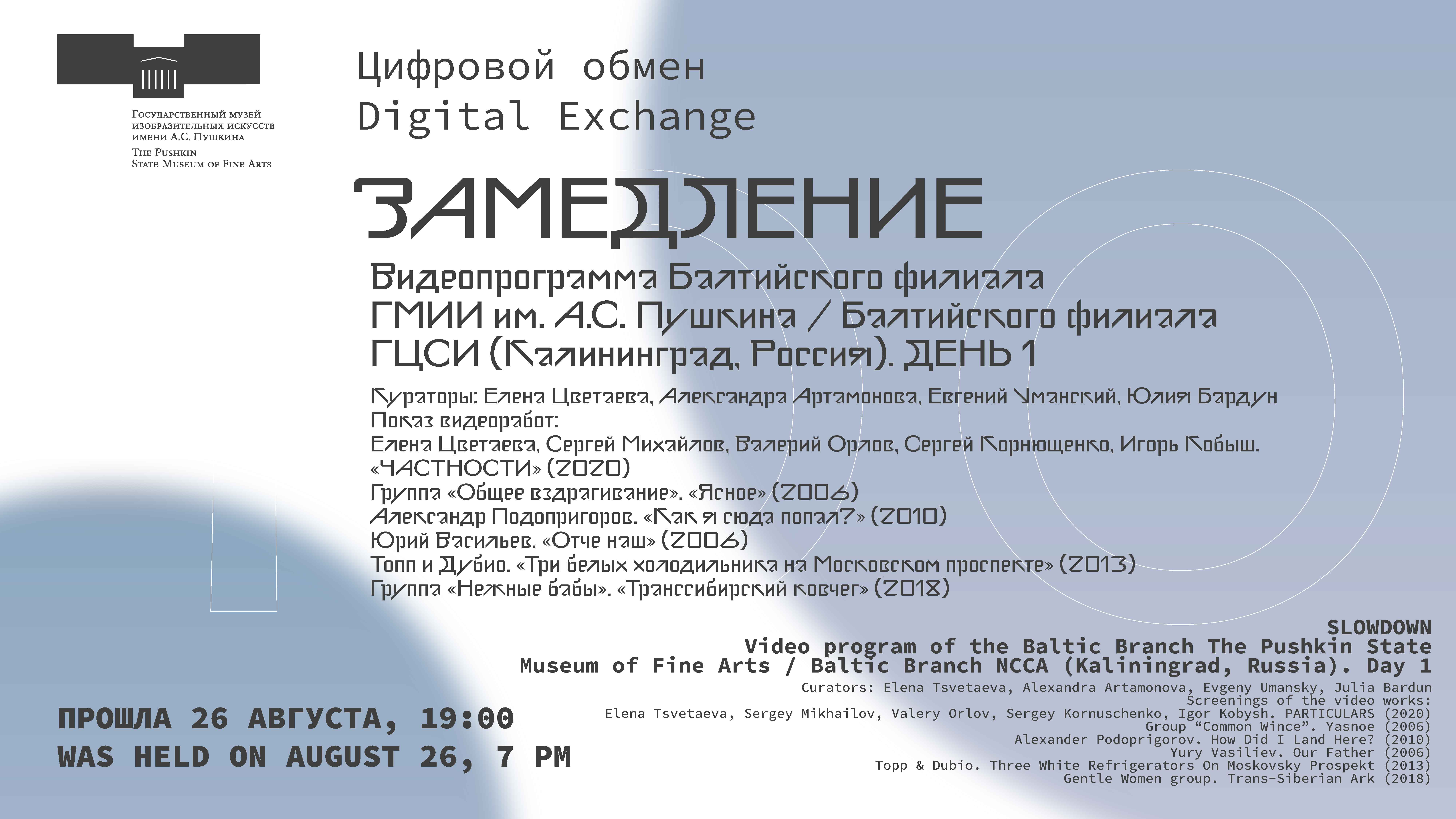 The Baltic Branch The Pushkin State Museum of Fine Arts / Baltic Branch National Center for Contemporary Arts (Kaliningrad, Russia) presents the video program “Slowdown”. This video program, compiled by curators and researchers of the Baltic Branch (hereinafter referred to as the branch), includes works by Russian and foreign artists united by the themes of rethinking the concepts of time and solitude, searching for new ways of experiencing everyday life and space, as well as exploring invisible strings that connect people and technology.

The program consists of two parts that will be broadcasted on August, 26 and 29, at 7 PM Moscow time (works remain available for 24 hours from the start of the broadcast). The video program “Slowdown” is composed in such a way that each of the curators represents the direction in which they are engaged in the artistic activities of the branch.

The program “Slowdown” is opened by the video work “PARTICULARS” (2020), created by the curator and head of the branch Elena Tsvetaeva together with artists Valery Orlov, poet Sergey Mikhailov, director Sergey Kornuschenko and sound director Igor Kobysh. This work reflects on a different way of living that very moment and also about a new, more intimate experience of sociality in the “era of separation”.

On the example of the works “Yasnoe” (2006) by the “Common Wince” group (Russia), “How Did I Get Here?” (2010) by Alexander Podoprigorov (Russia) and “Our Father” by Yury Vasiliev (Russia) (2006) Evgeny Umansky, curator, deputy head of the branch, and Alexandra Artamonova, artist, art critic, specialist of the branch, reflect on how the historical past of the territory affects the aesthetic of Kaliningrad authors.

Julia Bardun, curator, deputy head of the branch, presents the works of Topp & Dubio (Netherlands) “Three White Refrigerators On Moskovsky Prospekt” (2013) and Gentle Women group (Russia) “Trans-Siberian Ark” (2018). On the one hand, Julia and her proposal of the video works reflect about migration processes, rethinking of time, distance, movement, which we have encountered in recent months. On the other hand, it shows that the works proposed in their video selection reflect the priorities of the branch's activity: focus on rethinking the local cultural, historical and social heritage, urban environment and also on supporting and developing art.

In the second day of the program, we will propose to dive into the study of such an art direction as “deep media art” that is at the interface with philosophy and science and to which Dmitry Bulatov, artist, art theorist, curator, specialist of the Art Programs and Creative Projects Department of the branch devoted his part of the program and to watch three video works: “Origins of Life” (2010–2016) by Adam W. Brown (in collaboration with Robert  Root-Bernstein) (USA), “Guest” (2019) by :: vtol :: (Russia) and  “Myconnect” (2013) by Saša Spačal, Mirjan Švagelj, Anil Podgornik (Slovenia).

Irina Chesnokova, curator, specialist of the Art Programs and Creative Projects Department of the branch, will show how a public art installation becomes a metaphor of human loneliness. Irina will present a contextual video installation “Waiting room” (2012) by Yury Vasiliev (Russia) that was specially created and inscribed in the space of the real waiting room of the main train station of Kaliningrad.

Danil Akimov, artist, curator, specialist of the Art Programs and Creative Projects Department of the branch, will invite you to see or rather listen to the methods of acoustic reading of the urban environment by watching “URBAN AUDIO” (2013) by Florian Tuercke (Germany), who has been creating for fourteen years a series of instruments that transform ambient noise into musical sound.

As part of the direction to support and develop local young contemporary art, Nadezhda Blazhko, curator, leading specialist of the Art Programs and Creative Projects Department of the branch, will demonstrate the works by young artists: “Human Reducer Driver” (2020) by Alexander Vozhich (Russia) and “Sometimes Behave So Strangely” (2019) by Natalia Tikhonova (Russia) dedicated to slowing down and rethinking of the space.